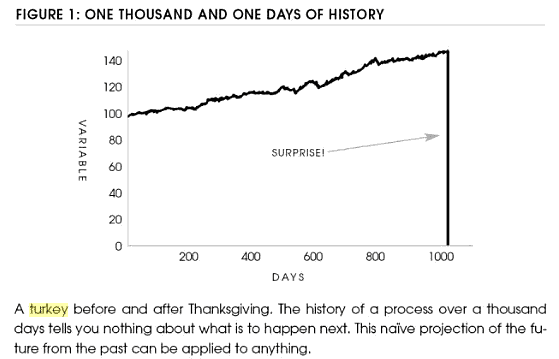 (Source: The Black Swan, by Nicholas Nassim Taleb, from www.bogleheads.org)

Today’s celebration of Thanksgiving in the U.S. reminds me of two things: I am thankful for my life, and I want to avoid being a turkey who expects the good times to last forever.

The “turkey problem” was popularized by Nassim Nicholas Taleb in his 2007 book, The Black Swan: The Impact of the Highly Improbable.

“Consider a turkey that is fed every day,” Taleb said (p. 40). “Every single feeding will firm up the bird’s belief that it is the general rule of life to be fed every day by friendly members of the human race…”

This goes on for months, and the turkey feels better every day. Then, the day before Thanksgiving, the farmer wrings the turkey’s neck.

“Consider that the turkey’s experience may have, rather than no value, a negative value,” said Taleb. “Its confidence increased as the number of friendly feedings grew, and it felt increasingly safe even though the slaughter was more and more imminent. Consider that the feeling of safety reached its maximum when the risk was at the highest!”

Things can deteriorate, and can deteriorate quickly. That’s why some gun owners in Canada and around the world train with guns, as Geordie Pickard wrote in Calibre magazine following the Nov. 13 attacks in Paris. Developing skill is fun, and could one day be useful.

Peace and prosperity in the past and present don’t guarantee it for the future, and only a turkey would assume that they do.

I don’t want to be a turkey.