Relieved Over Goodale? You May Be Missing the Real Threat 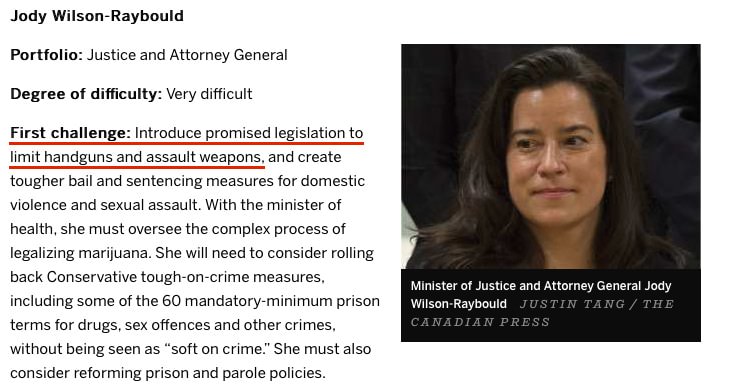 Canadian gun enthusiasts who are relieved over this week’s naming of Ralph Goodale as Minister of Public Safety instead of a more militant enemy of private firearm ownership may be missing the real threat.

It could be the Ministry of Justice, not Public Safety, that fulfills the new government’s campaign promise to make it harder to buy, sell and transport guns, according to the Ottawa Citizen.

The first challenge of Canada’s new Minister of Justice is to “Introduce promised legislation to limit handguns and assault weapons,” the newspaper said on its website yesterday.

Jody Wilson-Raybould was named Minister of Justice and Goodale was appointed as Minister of Public Safety on Nov. 4, along with the rest of cabinet, after the Liberal Party of Prime Minister Justin Trudeau won the Oct. 19 election. The Conservative Party had ruled since 2006.

The Conservatives had placed firearm regulations under the Minister of Public Safety. Many hunters, target shooters and gun collectors assume the Liberals will maintain that structure, and are relieved that Goodale was named as minister instead of members of parliament who want only the police and military to have guns.

“With some incredibly outspoken anti-gun individuals now in the elected Liberal caucus including Adam Vaughan, Bill Blair and Mark Holland, the general consensus was that, should any of those individuals be named Minister of Public Safety, it would serve as a signal that additional firearm regulation was a priority for the Trudeau government,” Calibre magazine said Nov. 4 on its website. “That none of those individuals were named to this particular office is, to put none too fine a point on it, the best thing we will hear all day.”

“The Canadian Shooting Sports Association extends congratulations to Minister Goodale and looks forward to working with him in his new role,” the group said today on its website.

Neither the CSSA nor Calibre mentioned the Minister of Justice.