He declined to identify his source for the information.

“We are prepared to consider whatever measures will be effective” for safety, Minister Bill Blair, in charge of exploring mass gun confiscations for the past nine months, replied to Clement in the House of Commons today.

Blair’s spokeswoman later told TheGunBlog.ca nothing has been decided.

See below for ideas to Take Action against a ban.

The government will confiscate via Cabinet directive without a vote in parliament, he said.

“I find this very concerning and not democratic,” Clement said. “My protest is that he’s doing this gun ban that affects potentially millions of Canadians — hunters, farmers,” recreational shooters and other responsible firearm users.

The former Conservative Party MP, who continues to oppose the governing Liberal Party, asked the government about the confiscation plan in the House of Commons earlier today.

(Transcript and link to full video are below.)

Update May 25: Video clips of the exchange between Clement and Blair on Clement’s Facebook and Twitter accounts had about 785,000 views as of May 25. That’s equivalent to more than one out of three licensed gun owners.

Update May 25: This article, or an earlier version of it and related threads, have been viewed more than 100,000 times at TheGunBlog.ca, Gun Owners of Canada and Canadian Gun Nutz.

Trudeau is preparing to pass Bill C-71 as a new law to simplify gun bans. It will start by ordering the confiscation of rifles from some 15,000 men and women after they die. It will also make it harder for federally licensed shooters to buy, sell, own or travel with firearms.

New restrictions and prohibitions on hunters and sport shooters present an “untapped opportunity” for the Liberal Party to win this year’s election with a strong majority in parliament, a government communication adviser said last year. 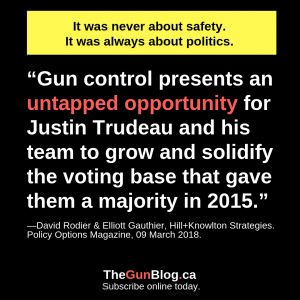 Opinion polls show Liberal voters are the most hostile to gun owners.

The Conservative Party, provincial premiers and senior police leaders — including the chief of the federal police — have said they don’t support banning guns from lawful, legitimate and licensed individuals.

Trudeau directed Blair in August to examine a “full ban” of handguns and many rifles and shotguns, all of them lawfully owned.

Bill C-71 will be Canada’s first major law against shooters since the Liberal Party passed the Firearms Act in 1995 to criminalize honest, safe and responsible men and women over paperwork, and to destroy hundreds of thousands of their guns.

Today, all firearms are banned for everyone under threat of prison unless they have a firearm licence.

– Our article from May 9 has more than 100,000 views at https://t.co/GQ6JM19X98 + CanadianGunNutz + Gun Owners of Canada.
– Tony Clement video clip has more than 735,000 views on Facebook + Twitter.#AwakenTheSleepingGiant

Canadian law allows Cabinet to tighten the legal classification of firearms through a so-called “Order in Council,” or OIC. It can move handguns or AR-15 rifles from the “Restricted” list to the “Prohibited” list. Bill C-71 moves some rifle models with the “Non-restricted” legal label to “Prohibited.”

Trudeau will announce his confiscation in Vancouver at the Women Deliver conference to be attended by New Zealand Prime Minister Jacinda Ardern, Clement said.

The website for the June 3-6 conference lists Trudeau and his wife, Sophie, as speakers, but not Ardern.

Ardern ordered the immediate surrender of most centrefire, semi-automatic rifles and shotguns and many pump-action shotguns in March after a shooting massacre.

Blair told a Senate committee last month the government is “taking a very hard look at the weapons” used by the New Zealand attacker, which included rifles and shotguns. He told CTV News in March the government is preparing “pretty big measures” to further restrict civilian gun owners.

Clement didn’t say if Trudeau is targeting some or all gun owners, firearms, or places, or whether confiscation will be immediate or gradual.

Video of my question in Question Period about the Liberals' secret plan to ban legal firearms without Parliametary debate. #cdnpoli #ParrySound #Muskoka pic.twitter.com/0owdipHvee

Hunting and sport shooting are at the heart of Canadian heritage and culture, and farmers rely on guns to protect their livestock, crops and themselves.

About 2.2 million men and women have a gun licence, more than the number who play hockey. They buy more than a thousand new firearms each day.

Owning a gun is one of the most-tightly restricted and invasive activities for a Canadian living outside of prison.

Buying, selling, owning and traveling with guns are strictly regulated. Many firearms require special police permission to purchase and additional police registration to own. Police can inspect the homes of gun owners.

Violating any rule can lead to prison, such as taking a detour on the way to the target range or being late reporting a change of address.

Clement declined to identify his source of information or how they learned about the bans. The source isn’t in the firearm industry or a gun-rights association, Clement said.

“I have a source on good authority that is not the gun lobby,” he said.

Marie-Emmanuelle Cadieux, a spokeswoman for Blair, commented to TheGunBlog.ca by e-mail in response to our request for information.

Minister Blair engaged with Canadians and experts about ways to combat increasing gun violence through multiple formats, the results of which will help us determine next steps as to any possible changes to firearms legislation, all while respecting law-abiding gun owners. Contrary to Mr. Clement’s question no decision has been taken nor has he been privy to any discussions.

Here is the engagement summary report following the dialogue on handguns and assault-style rifles undertaken by Minister Blair and Public Safety Canada.

Following is the full text as transcribed by TheGunBlog.ca of Clement’s question in Question Period, followed by Blair’s response.

Mister Speaker, I am told on good authority that the Prime Minister has a secret plan to ban legal firearms.

Apparently this plan is to be executed by cabinet directive with no debate in Parliament. The Prime Minister plans to announce this gun ban at the Women Deliver Conference held in early June in Vancouver, where New Zealand Prime Minister Ardern will also attend.

Can the Prime Minister confirm or deny this zero-accountability secret plan?

I just want to assure this House that our government remains absolutely committed to taking all the measures that are effective in keeping Canadians safe. And as I believe every member of this House will agree, there is no greater responsibility for any order of government than the safety of their citizens and the protection of their kids. We are prepared to consider whatever measures will be effective in doing so.

“The interesting thing about Minister Blair’s response when I asked him to confirm or deny is that he did not deny,” Clement told TheGunBlog.ca.