TheGunBlog.ca — The Canadian Association of Chiefs of Police will lobby the government to pass new laws as it accuses licensed gun owners of supplying weapons to criminals, CBC News reported today, citing the chair of a committee on firearms.

His comments suggest the panel has already decided what it will propose to the CACP board by a March deadline.

Bray already knows that most firearms used in crimes in Saskatchewan are domestically sourced within the province.

The task force is looking for legislative solutions. One it's already looking at centres around the fact that most criminals caught using firearms don't have the licence that's required to buy them, Bray said.

What's happening is people with licences buy a lot of firearms and sell them illegally, said Bray — and the task force wants a system in place to track that.

Bray and the CACP didn’t respond to an e-mailed request by TheGunBlog.ca for comment or for information to support the statements reported by CBC. Update Jan. 18 at 14:00 Toronto time: A link to Bray’s interview with CBC Radio Saskatchewan’s The Morning Edition couldn’t be found.

“Instead of a legislative ‘solution,’ how about do some good old fashioned police work,” Doug McComber, the founder of OneClearVoice.ca for gun rights, said in a comment to the article. “Work with local gun stores, conduct some ‘stake outs’ and catch the straw purchasers and put them in jail.”

The police lobby said in October it was creating the special committee and asking it to report by March. The association decided to form the panel in August a week after the Globe and Mail said the government may end civilian handgun ownership. The government later said it’s studying a “full ban.”

(See here for some of the ways the CACP has worked against licensed gun owners.)

“Why are police organizations allowed to lobby for new gun laws?” said Rick Hemmingson, a lawyer in Calgary. “It creates a huge conflict and misapprehension of the role of police in a civilized society. They are not supposed to make the law.”

Hunting and target shooting are among Canada’s safest and most-popular outdoor or sporting activities. More men and women have a police-approved gun licence than play hockey, baseball, football or who ski. Millions of unlicensed family and friends also shoot safely and responsibly under their watch.

It’s illegal to buy, sell, have or transport any firearm without a licence, and doing so can land you in jail. Any new legislation would penalize only lawful shooters and continue to be ignored by outlaws. Crime with guns represents less than 0.5 percent of all offences in Canada, according to Statistics Canada.

Many politicians and police have claimed “domestically sourced crime guns” and so-called “straw purchasers” are a rising threat to public safety, without providing evidence to back their assertions.

The available data, almost all of which has been obtained through special requests by Dennis Young, suggest the claims are baseless or false, even after including the hundreds of guns that police supply to criminals through loss or theft.

In Toronto, Canada’s biggest city and the base of its largest municipal force, the percentage of “domestically sourced crime guns” fell for the third consecutive year to a six-year low in 2017, and more than a third of so-called “crime guns” weren’t firearms, according to analyses of police data obtained by Young.

The findings contradict what Toronto Police Chief Mark Saunders told the Toronto Star in 2016 and what other officers were reported as saying last year.

Although several licensed shooters across Canada have been convicted or charged with illegally selling dozens of firearms, nothing indicates this to be a broad or rising trend among the more than 2 million men and women with gun permits.

“What we don’t know: the origin of firearms involved in gun crime in Canada,” Lynn Barr-Telford, director general of health, justice and special surveys at Statistics Canada, said in her presentation to the National Summit on Gun and Gang Violence last March in Ottawa. 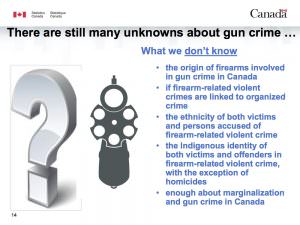 Wow! We have hardly even begun. Our goal is to reduce gun violence and do so in responsible ways. This stuff just makes you shake your head. https://t.co/sJgkwJGA2T