Stabbing Is Top Method of Homicide, So Why Such a Focus on Guns? 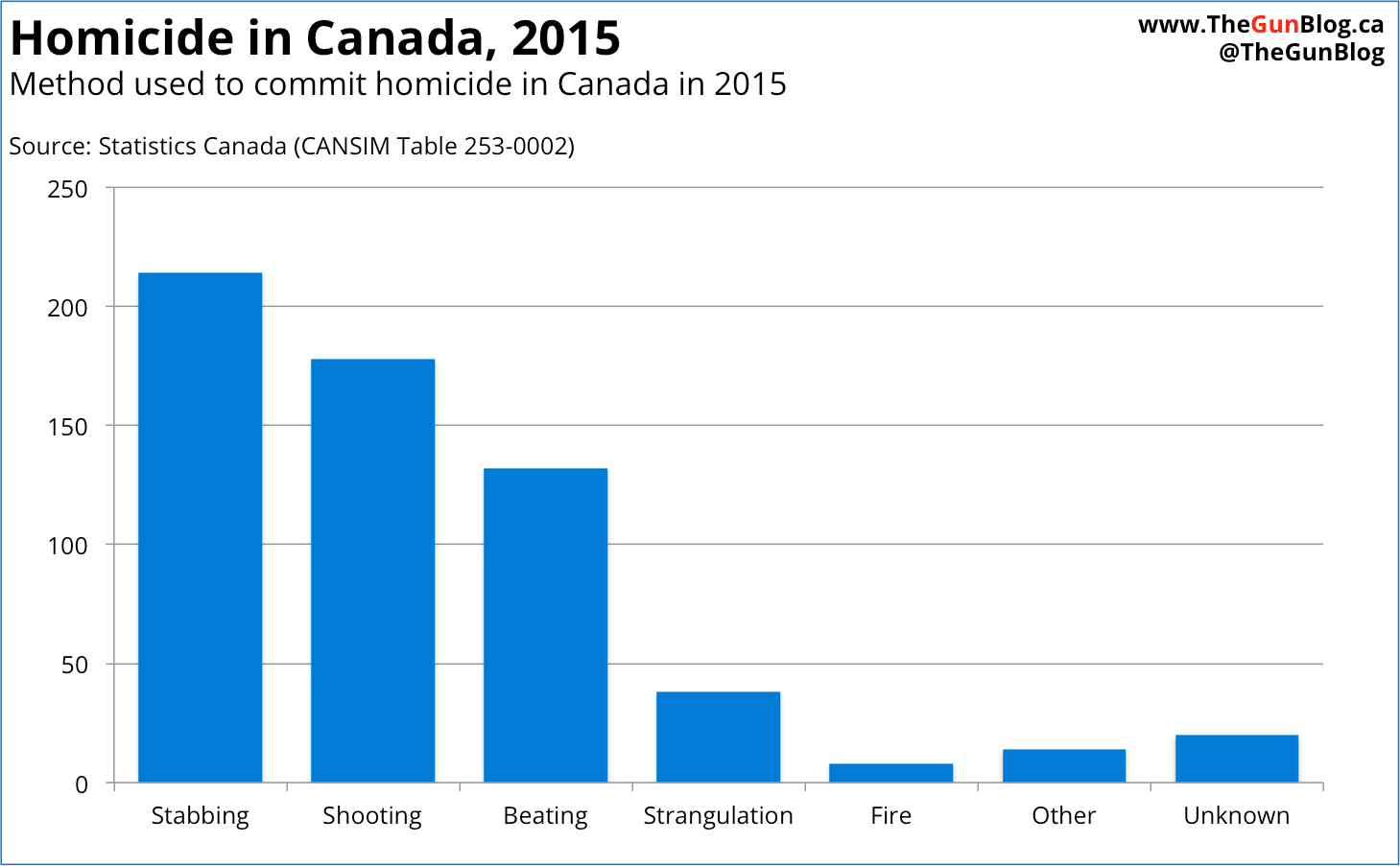 Stabbings exceeded shootings as the leading method of homicide in Canada last year. Again. So why do we ignore knives and focus so much on guns?

Of the 604 homicide victims reported by police in 2015, stabbing was the method used in 214 cases (37 percent), shooting in 178 cases (30 percent) and beating in 132 cases (23 percent), Statistics Canada said in its annual homicide report released yesterday.

“These proportions are similar to those reported over the past 10 years,” Leah Mulligan, Marsha Axford and André Solecki said in their report.

When was the last time you saw a headline calling for tougher knife laws or stricter regulations for knife owners, or demands to end knife violence and get knives off our streets? How about an analysis of the relationship between knife ownership and violent crime? The only place you’ll see any of those is in a snarky post by TheGunBlog.ca a year ago on the 2014 homicide data. (I know, I know, knives aren’t the only tools for stabbing.)

Focusing on the tools and methods of crime is informative, but we shouldn’t blame them or consider them as the cause of crime.

Guns attract a lot more attention than knives in the media and for our country’s statisticians. The biggest section in their report was an analysis of firearms used in fatal shootings, perhaps because, as they said, “Firearm-related crime rose in 2015 for the second year in a row.” How does that compare with their review of knives or other tools used in fatal stabbings, considering they were the most popular method of homicide in almost every province and territory? Easy. There isn’t any analysis of stabbings.

Consider these numbers on word frequency in the text of the StatCan report (i.e., excluding tables, charts and footnotes). “Stabbings” is used once. Gun-related words are used 36 times.

Makes you wonder, doesn’t it.

Update on Nov. 25: Statistics Canada said it had planned a shorter version of its report, and expanded the firearms section to meet requests from police and policy makers.

“In our review process, there were requests from our justice partners to add a bit more detail — particularly the local picture — for firearms,” Rebecca Kong, manager of the policing-services program at Statistics Canada, said in a telephone interview. “We try to make the information available. In terms of the analysis, that’s why the section became a little longer than we had anticipated.”

“This information is used in terms of looking at prevention methods, risks, etc. and to develop the operational-level and policy-level policies related to that,” Kong said. “This has always been part of our indicators that we put out as part of the survey. There’s always been an interest in this, particularly the firearms.”

A note on methodology: the homicides in this study are all considered criminal acts, Kong said, and the data would exclude any cases of legal self-defence that resulted in death. If the firearm is listed as the primary method of killing, it means the firearm was discharged, she said. If it were used to beat the victim, it would be counted as a blunt object, and not a firearm-related homicide.